I work regularly as a speaker on board cruise ships, usually joined by my wife Sue , a marine biologist, who helps with spotting wildlife on deck.Since we started this work in 2005, we have made many friends, who often ask about our future cruise plans, and we are always delighted to make new friends. On Viking Ocean Cruises, we generally have responsibility to cover all aspects of the natural history of these trips, both on sea days and on shore. I increasingly also cover 'destinations' information in my work for Regent Seven Seas Cruises. We are happy to highly recommend both these companies, both for the superb standards of comfort and value for money. We also love talking to guests on deck as we watch for seabirds or whales, or joining you to spot flowers and wildlife ashore. We try to keep this page updated with all the latest news of our future cruise bookings.

We begin the New Year auspiciously back on Seven Seas Navigator for two back-to-back cruises, starting with an amazing 36-night trip, appropriately called CIRCLE AUSTRALIA. This begins in Sydney on January 23rd and ending up back there on February 28th. See the map below for the full anti-clockwise navigation of the continent, and check here for more details of this very unusual cruise. 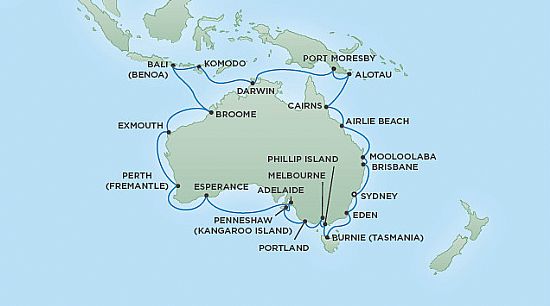 We then stay on Seven Seas Navigator for a welcome return to some NEW ZEALAND SPLENDOR, on a cruise which departs Sydney on February 28th and visits Melbourne and Burnie in Australia, Milford Sound, Dunedin, Akaroa, Wellington, Napier, Tauranga (for Rotorua) and Bay of Islands, all in New Zealand, ending in Auckland on March 13th. Read all about that cruise here.

In June 2020, we'll be joining two back-to-back ICELAND'S MAJESTIC LANDSCAPES cruises for Viking Ocean Cruises again, on Viking Sky. The first cruise leaves Bergen on June 3rd, via Flåm, Ålesund and Geiranger in Norway, Torshavn on the Faeroe Islands, and Seydisfjordur, Akureyri and Isafjordur in Iceland to Reykjavik where the cruise ends on June 15th. The second cruise departs Reykjavik later on June 15th, and visits the same ports in reverse order, returning to Bergen on June 27th. Check here for more information on those cruises.

After several years of Svalbard-starvation, we've been tempted back onto Saga Cruises and their new ship Spirit of Discovery for a cruise to the Svalbard Archipelago, appropriately called ARCTIC EXPEDITION. This sails from Dover on July 7th, with stops in Stavanger, an overnight in Tromsø, then Longyearbyen on Svalbard, followed by visits to the nearby 'ghost town' of Pyramiden and the former Soviet mining base of Barentsburg, also on the shores of Isfjorden. We then return, via Mo i Rana and Bergen, to Dover on July 23rd. Read more about that cruise on the Saga website here.

On October 22nd 2020, we are booked join a 7-night LA to LA cruise called CITIES OF THE SUN, visiting three Mexican ports on Seven Seas Mariner (full details here).  For us, though, that is just a prelude to LOST EMPIRES OF SOUTH AMERICA, a 16-night trip departing Los Angeles on October 29th, visiting Cabo San Lucas and Acapulco in Mexico, Puerto Quetzal in Guatemala, Corinto in Nicaragua, Puntarenas in Costa Rica, Esmereldas and Manta in Ecuador, Salaverry and ending in Callao, for Lima, both in Peru. There's more here about that great trip.

We then end 2020 back on Viking Star on FROM THE CARIBBEAN TO THE AMAZON. This departs San Juan in Puerto Rico on November 29th, travelling via Bridgetown in Barbados and Iles de Salut in French Guiana to the Amazon, with stops in Santarem, Parintins, Manaus and Belem. It then returns via Scarborough in Tobago, Castries in St Lucia, St Johns in Antigua and St Thomas in the US Virgin Islands, back to San Juan on December 20th, The map for that cruise is below, and full details are here. 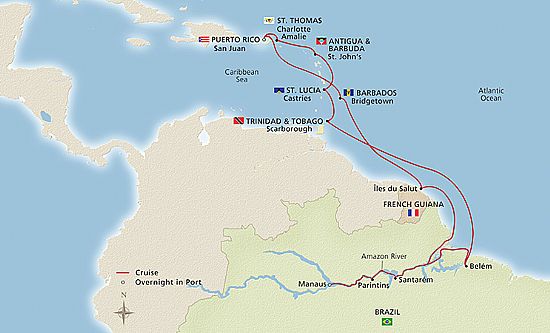 For various personal reasons, mainly related to workload, I have withdrawn from a previous booking on Seven Seas Mariner for the first half of her 2021 World Cruise, with apologies to any guests that I had previously told I would be on that trip. I hope to be announcing a rather shorter cruise booking in February shortly.

Later in 2021, we're due back on Seven Seas Navigator for SUMMER IN GREENLAND, starting from New York on May 31st, visiting Martha's Vineyard, Boston and Bar Harbour, then St John's in the Bay of Fundy. Next are return visits to Halifax, Sydney and Corner Brook in Canada, Nuuk, Paamiut and Prins Christian Sund in Greenland, then Isafjordhur in Iceland before ending in Reykjavik on June 16th.  The full cruise details are here.

I'm then keeping space clear for a couple of cruises from the UK, which are still to be confirmed.

I end the year back on Seven Seas Voyager, beginning with ADVENTURE IN AFRICA. This starts from Abu Dhabi on October 30th, visiting Fujairaj in the UEA then Muscat and Salalah in Oman. Three days at sea then take us to Mahe and a first visit to Praslin in the Seychelles. Next up are visits to the usual ports in Mauritius and Reunion, followed by a first visit for us and Regent to Fort Dauphin in Madagascar. The cruise then ends with Maputo in Mozambique, then Richards Bay and Mossel Bay before ending in Cape Town in South Africa on November 21st. The Regent website has details of that great cruise here.

That's immediately followed by a 16-night Cape Town round trip, appropriately called SOUTH AFRICAN RADIANCE. We then have an overnight in my favourite port of Walvis Bay, followed by Luderitz in Namibia. The cruise then visits Port Elizabeth, Durban (for another overnight), Maputo, a third overnight in Richard's Bay, before a stop in Mossel Bay on the way back to Cape Town on December 22nd, with just enough time to get home for Christmas. More information on that here.

We are always happy to discuss future opportunities with cruise companies, either directly or via the P&R Agency at Peel Talent.

More for 2021Return to SvalbardCruises 2020-21More 2019 and 2020 cruises
Thank you for ordering from the adverts below, which helps to support the cost of running this website.
Michael's Current Titles